Did you ever wonder, if you were to add up every order you ever made on Amazon, what that number would be? 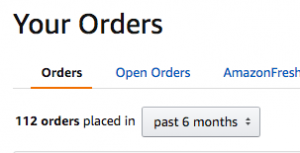 I prefer not to think about it in the same way I ignore the scales in my bathroom. But, when I was researching a prior purchase, I couldn’t help noticing a little drop-down box, it innocently read “past 6 months” and in that moment my damnable morbid curiosity took over.

My Amazon Orders Since 2009 (cumulative) 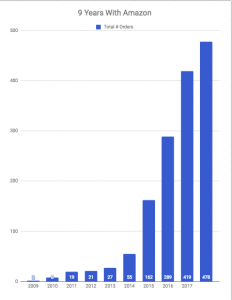 It shows a pretty staggering increase and it looks like somewhere around 2014 things started to get serious between me and Jeff.

If some of you are wondering how much all that ‘stuff’ costs….

So was I. How much money have I spent with Amazon, over these years?

Now, Amazon doesn’t give you an easy way to see this (or at least I couldn’t find one in the 5 minutes I spent looking) so I fetched my calculator (well actually the calculator app on my iPhone) and began tapping away.

I started with 2009 and began adding each order, totaling each year and finally, after several attempts, I reached a Grand Total:

With morbid curiosity fully in command at this point, I imagined how this would look in a nice Bar/Area combination chart.

So, once again, here is another really cool chart to highlight this for you;

(notice the bold use of left and right axis, combining two independent and unique data series, each powerful in their own right, yet somehow only fully complete when combined. See how each carefully calibrated axis is finely tuned to accentuate meaning while the subtle use of transparency lulls us into an acknowledgment of the inevitable …. first hinting, then gently nudging us as our eyes climb the subtle green mountain juxtaposing the gaudy symbolization of money ) 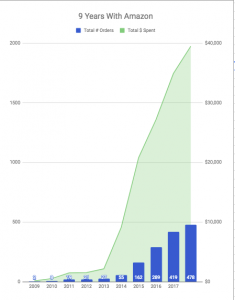 I suppose I could pretend that my spending has fueled Amazon’s meteoric stock rise, after all, it closely correlates with my purchases. Amazon’s stock was in the lowly $50’s when I made my first purchase and now it is currently rocketing out of the stratosphere in $1500+ range.

I just had to see this in a chart. So here is another cool overlay of how Amazon stock followed my spending habits: 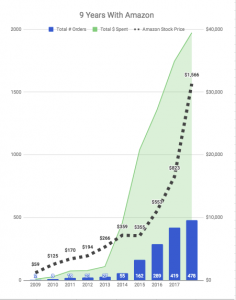 I’m not sure what all this says about Amazon or society in general, or frankly what it says about me. I was told once that ‘fat people are usually the experts at dieting’…. maybe you could use the same logic to point out the futility of this analysis.

However, before I check myself in for consumer therapy I think I will tip my hat to Amazon and the incredible platform they have built – let’s not forget they have transformed an entire culture’s mindset. A mindset that, for those of us who remember the propaganda of fear uncertainty and doubt, was mostly reluctant or strongly opposed to the concept of online purchasing. Fast forward to today and a culture that has fully incorporated it…..

as I (and likely you too) am living proof of.